[Introducing Take Two, a new feature on this blog that will explore the contextual (historical, aesthetic and otherwise) similarities and differences between two versions of the same material, whether two films based on the same source or simply original and remake.]

While most critical accounts of the opening thirteen minutes of Robert Siodmak’s 1946 adaptation of the Ernest Hemingway short story (originally published in 1927) stress its painstakingly accurate transposition of the original narrative—minus some profanity and a racial epithet or three—this isn’t exactly, or entirely, the case.

Hemingway’s story opens with the hired killers, Max and Al, entering Henry’s Lunch Counter. Siodmak’s film opens with a process shot of the archetypal Lost Highway—dotted white lines picked out by headlight glare and framed through a windshield—as the two killers drive into Brentwood, New Jersey, park the car, examine the empty filling station where their target, Ole “the Swede” Andreson (Burt Lancaster), works and only then going into the lunch counter. The action occurs under the opening credits and doesn’t occupy much time, but already Siodmak and DP Elwood Bredell establish the dominant mood of doom and death through shots of the killers (William Conrad, Charles McGraw) moving between pools of shadow and splashes of light: 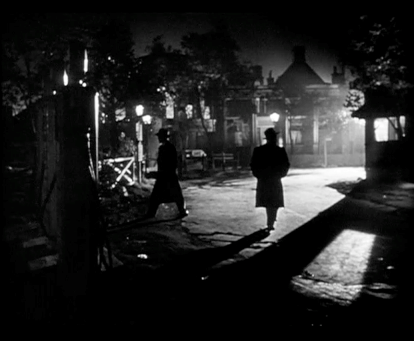 The patter between the killers and the occupants of the lunch counter swerves dangerously back-and-forth between mockery and menace: It seems apparent that Hemingway derived their clownish banter from vaudeville routines since, at one point in the story, they are referred to as “vaudeville twins.” (Thus establishing another archetypal relation, among whose descendants we would consider Joe Pesci and Ray Liotta in Goodfellas [1990] and, more forecefully, John Travolta and Samuel L. Jackson in Pulp Fiction [1994].)

The other significant departure from the short story occurs at the end of the sequence. Whereas in the story Nick Adams returns to the restaurant, nonplussed by Andreson’s fatalistic non-response to the news that he’s been fingered for a hit, in the film we see the assassination take place—but not before Siodmak takes his time with the scene, lingering on Lancaster’s face to register the resignation. As the killers make their way up the stairs, the cutting and music pick up the pace, reaching a thunderous climax as the bedroom door flies open and the killers unload a volley of shots into the Swede. We see his death metonymically, as it were: a hand clutches a bed rail, then falls away limp, inert.

(A word should be said at this point concerning Miklos Rózsa’s score. The ominous four-note “Danger Ahead” theme that occurs every time the two killers make an appearance throughout the film was later lifted whole cloth by composer Walter Schumann for the Dragnet radio and TV series. Initially uncredited, Rózsa had to litigate in order to have his name attached to the copyright for the incredibly lucrative theme music.)

The rest of the film unfolds in a series of flashbacks—the labyrinthine structure earned it a reputation as the Citizen Kane of films noir—as insurance investigator Edmund O’Brien attempts to piece events together. Though the subsequent narrative, which owes a clear debt to Billy Wilder’s Double Indemnity (1944) for its insurance office milieu, may not preserve the minimalist exactitude of its opening, Siodmak and Bredell’s camerawork and staging never slacken. Drawing on his German Expressionist background, Siodmak continues to fill the frame with shadows and murk. He also reveals a particular fondness for tracking and high-angle shots. 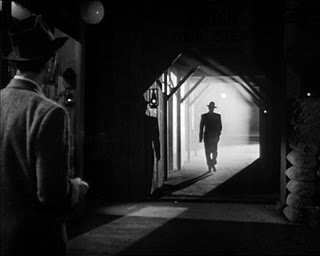 Two examples will suffice for our purposes here: In the first, we watch the killers approach the Swede’s boarding house from a second-floor window; the camera then tracks back and pans to the right, picking out a shadow-shrouded figure sprawled across a bed. In the second, the Swede enters a hideout from an adjacent rooftop, coming in a rear window and getting the drop on Big Jim Colfax and his gang, seen gathered around a card table far below. (Furthermore, the sharp diagonal framing within the shot adds to the overall feeling of spatial dislocation, achieving a kind of canted angle without actually tilting the camera.)

The other visual grace note to be discerned in Siodmak’s always impressive shot composition will be a spectacular hat factory heist sequence shot with a crane-mounted camera in one long take: Starting on high with an establishing perspective, the camera moves in on a queue of workers filing through the gate into the factory, picking out the conspirators in the heist. Moving back up, all the while fixed on the four criminals, the camera tracks through the gate and pans over to a building marked PAYROLL, rising up to watch through the plate glass as the robbers commit their heist, then reverses down and over as they emerge from the building and fall in behind a van exiting back out the gate. Once outside the gate, the robbers make a break for separate vehicles, a watchman runs after them, shots are exchanged, and the camera—raised up to full height, one imagines—moves off down the street as the bandits make their getaway. All told, the shot lasts some two minutes and, owing to its dizzying complexity, must be said to rival many another long-take crane sequence (though, in all likelihood, would have to concede to the bravura opening of Orson Welles’ Touch of Evil [1958].)

Wrapping up its narrative, after an almost Shakespearean climax that finds several characters’ bodies littering the scene, Siodmak’s film veers into bathos. Back at the office, Reardon (O’Brien) and his superior discuss the net effect the discovery of the criminal conspiracy and its undoing will have. Kenyon, Reardon’s boss, informs him: “Owing to your splendid efforts the basic rate of The Atlantic Casualty Company – as of 1947 – will probably drop one-tenth of a cent.” That is to say, this labyrinth of larceny and lust, a “limited liability” if ever there were one, amounts to next to nothing, the proverbial “hill of beans,” compared to the larger economic and corporate forces at work upon the nation as a whole.

In 1964, Don Siegel—reputed to have been producer Mark Hellinger’s first choice to direct the earlier version—was hired by Universal Studios to helm a remake of Siodmak’s film, intended to debut as the first “made-for-TV movie,” except the end result was judged by NBC too violent to air on national television, especially in the wake of the JFK assassination, so Universal released it theatrically instead on July 7th, 1964. (The “made-for-TV movie” phenomenon coincided with corporate mergers that served to cement the link between the former media rivals. Now no longer content to merely license films for broadcast, these newly-minted media conglomerates moved into the production arena.)

This explains the overriding aesthetic to be found in Siegel’s version: not so much a film noir as a film blanc, the director utilizes prevailing televisual codes (the image is flat and bright) as a comment on the characters and their surroundings in ways quite similar to those embodied in the older noir films. Whereas monochrome betokened mood, mystery, a miasma of unease and distrust, a literal darkness to be discovered as much along the ill-lit and ill-intentioned urban streets as lurking within the hearts of men (and women, probably even especially women), the new televisuals heralded the birth of the cool. (Not for nothing had media theorist Marshall McLuhan recently put forward this adjective as the ideal descriptor for the baleful TV eye.)

“Cool” describes to perfection the new breed of “professionals.” Marvin’s Charlie Strom dresses like a businessman, carries a briefcase and sports dark glasses. His partner, Lee (Clu Gulager), is a “health nut,” and a bit more impetuous than the calculating Charlie. In ways, they are an “odd couple,” embodying opposite tendencies; nevertheless, they both represent varieties of the “New Sentimentality” that future Bonnie and Clyde scribes Robert Benton and David Newman laid out in an influential article appearing in Esquire the same month as the film’s release: “One of the definitions of New Sentimentality is that it has to do with you, not what you were told or taught, but what goes on in your head, really, and in your heart, really.” Beneath this tablet of new values, prizing the “rugged” individual in the face of the body politic, can be found the mainspring that operates throughout Bonnie and Clyde: the propensity for brutal violence. For Charlie and Lee, it’s more than a business tactic, it’s a way of life. 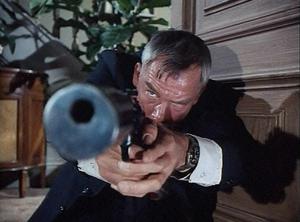 Cool also pertains to the anti-authoritarian vibe exuded by John Cassavetes in the role of Johnny North, reconfigured from a broken-knuckled pugilist to a drag-racing speed enthusiast who smashes up on the day of the big race. Cassavetes, like Gulager, was fresh from a stint on television, starring as the eponymous hipster jazz pianist/gumshoe in Johnny Staccato (1959-60). Maybe not so cool are the surreal and ultimately distracting process shots Siegel uses over the course of Johnny and Sheila’s (Angie Dickinson) protracted “meet-cute”—tolerable enough, initially, when equating speed and sex in a sports car, then just downright loopy as the two careen around a go-cart track. (Three years later, Marvin and Dickinson would be reunited for John Boorman’s revelatory “spectral noir” Point Blank [1967].) 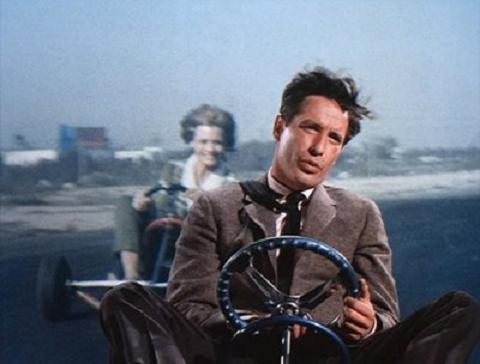 No longer shunted to secondary roles, Siegel’s duo are now the engine that drives the story. The film lacks any prototypical force for law and order, no police lieutenant or insurance investigator, however feckless. The reason for piecing the puzzle together has changed, as well. Granted, there’s a million-dollar heist at issue (and money certainly is the major motivator), but the sole item that really gets under Charlie’s skin—and here the film hearkens back to the Hemingway story—is the utter lack of affect behind North’s acceptance of his own assassination. “You see, the only man that’s not afraid to die is the man that’s dead already,” Charlie says. And nothing can kill a man’s will to live quite as effectively as a fatal female.

How appropriate in retrospect that, in his final film role as gang leader Jim Browning, Ronald Reagan should play, for the first and only time in his career, the heavy! Like his character, Reagan, too, was on the threshold of “going legit”: first as governor of California, then as two-term President of the United States. Trafficking between Hollywood and DC was hardly new. Earlier that decade, JFK had been the first living Executive Officer to become the subject of a film (PT 109 [1963] starring Cliff Robertson). Reagan simply reversed the direction. 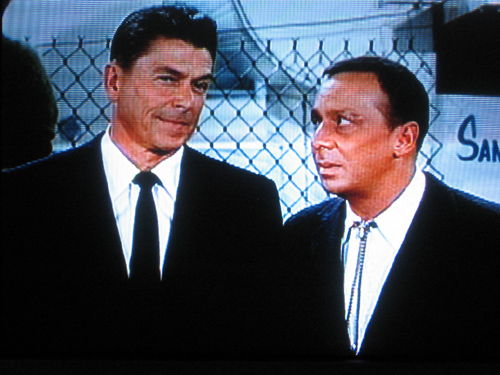 “Improving” on the earlier version, Siegel’s film ends with every major character dead. In the 1946 version, O’Brien, of course, “prevailed,” and Ava Gardner’s Kitty Collins faced the prospect of either a life sentence or the hot seat, despite her best efforts at getting Big Jim to declare her innocent. (And providing probably the film’s best line: “Don’t ask a dying man to lie his soul into hell.”) Far from the shadowy finale Siodmak staged, Charlie Strom dies in an ignoble sprawl amid a verdant, sun-drenched suburban lawn.

Take 2.5: Worth mentioning for the film-historical minded, the Criterion edition of these films also includes, as a key supplement, the 1956 student film version of the Hemingway story co-written and co-directed by Andrei Tarkovsky while at the VGIK. It, too, plays like a (more) literal transcription of the story, this time including the profanity and racial slurs. Formally (and how can one not invoke that term when discussing one the great Russian masters), the short is no new shakes, very bares bones in the set and prop department, the sole directorial flourish a canted-angle POV shot inhabiting the bound-and-gagged Nick Adam’s perspective. Also notable, Tarkovsky eschews the urgency (and musical insistence) of Siodmak’s version, indulging instead in the deliberate, nearly languorous, pacing for which he would soon become famous (some might say infamous).