Director Louis Malle’s third feature signals a sea change in his work: gone are the dark visuals and themes of the neo-noir Elevator to the Gallows, let alone the envelope-pushing erotic fireworks of The Lovers (though, like Elevator, Zazie is obstreperously preoccupied with the streets and denizens of Paris). In their stead stands this whimsical free-for-all, based on the celebrated novel by one-time surrealist Raymond Queneau, who more recently had co-founded Oulipo (Workshop for Experimental Literature) with the likes of Umberto Eco and Italo Calvino. By all accounts, Queneau’s novel uses a radicalized variety of spoken, everyday French (vastly different, or so I am told, from strictly monitored written French, as presided over by the Academie Francaise) to convey its anarchic storyline.

Malle and artistic director William Klein (an American artist and photographer who would go on to have his own rather fascinating directorial career in French cinema) sought to convey the same fractious, fractured feel on film by the extensive use of wide-angle lenses (providing the requisite distortion), neon light color-coding, and a variety of techniques (sped-up film, Pop Art-derived set design) meant to recreate the look of comic strips and old Tex Avery cartoons.

Still, the overall tone of Zazie is far from cartoonish–despite the nearly ten minute chase sequence that serves as the film’s centerpiece, responsible for the bulk of the Avery-aping–as subtle notes of disaffection and defeat are introduced from the very onset: Precocious provincial lass Zazie accompanies her mother on a trip to Paris, her one keen desire to ride the fabled Metro, but no sooner do they arrive in the capital than she’s pawned off on Uncle Gabriel (an early role for Philippe Noiret) so that mother can spend the next few days shacked up with her lover. Not to mention, the subway workers are out on strike.

From there on, the above-ground peregrinations, chases and just plain wanderings constitute a kind of initiation for Zazie–a pubertal Odyssey, as it were. (In the book, Zazie is a few years older and her mother worries over her virginity; whereas making her about 12 may up the whimsy ante, it also allows for the “rite of passage” quality to move front and center.) Zazie’s last line, after meeting up with mother on the outbound train, sums it up nicely. When Maman asks her how she passed her time, Zazie retorts, “I got older.”

Every now and then, the breathless pace and sheer determination to keep it inventive grow a little tiresome. An irksome sense of déjà vu sets in. But just then Malle and Klein throw a left hook from left field–and you’re in the film’s corner again. From an astonishing series of sight-gags filmed around and atop the Eiffel Tower to a climactic brawl that brings the house down in more ways than one, the director’s formal and stylistic control never falters. There is certainly nothing else like it in the oeuvre of Louis Malle. 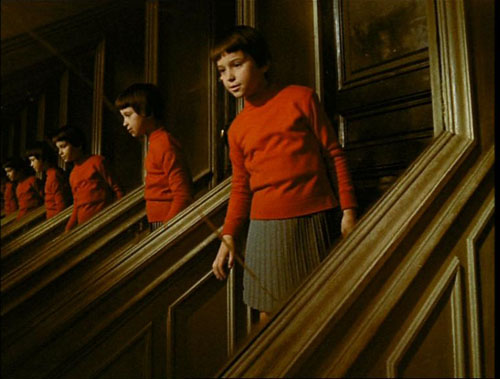 Budd Wilkins is a writer, film critic and instructor. He is a Staff Critic for Slant Magazine, and his work has also appeared in the Nordic Issue of Acidemic Journal of Film and Media. He is currently writing a chapter for an anthology on international horror directors to be published by Intellect Press and distributed by University of Chicago Press. Mr. Wilkins was born and raised in Hollywood, Florida. He attended Penn State for several years before moving to North Carolina in 1994, where he earned his Bachelor's in Religious Studies and a Master's in Liberal Studies with a concentration in Film Studies from The University of North Carolina at Greensboro. His primary focus is film history, film literacy and criticism, with the goal of bringing obscure, foreign and films that are labeled "difficult" to the attention of film aficionados of all kinds. Other interests and focus of critique include comparative religion, black humor, 19th century European literature, horror and graphic novels. Mr Wilkins lives in Greensboro, North Carolina with his wife, Tina. Follow @buddwilkins on Twitter.
View all posts by Budd Wilkins →
This entry was posted in film, movie reviews and tagged italo calvino, louis malle, oulipo, philippe noiret, raymond queneau, tex avery, umberto eco, william klein, zazie dans le metro. Bookmark the permalink.