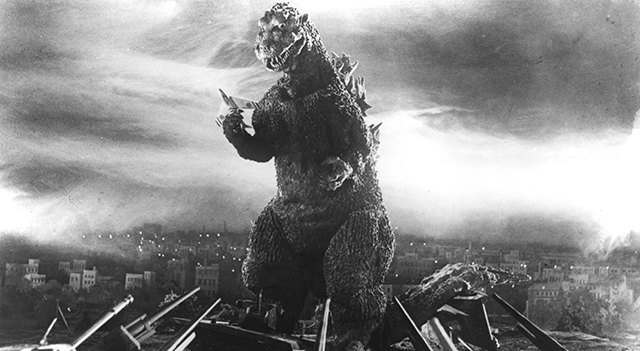 “Rarely has the open wound of widespread devastation been transposed to celluloid with greater visceral impact. Put another way, Godzilla is the Germany Year Zero of monster movies.”

Read my review of Godzilla, which plays for a week at NYC’s Film Forum in preparation for the big-budget, big lizard remake that comes out next month, at Slant Magazine.

Budd Wilkins is a writer, film critic and instructor. He is a Staff Critic for Slant Magazine, and his work has also appeared in the Nordic Issue of Acidemic Journal of Film and Media. He is currently writing a chapter for an anthology on international horror directors to be published by Intellect Press and distributed by University of Chicago Press. Mr. Wilkins was born and raised in Hollywood, Florida. He attended Penn State for several years before moving to North Carolina in 1994, where he earned his Bachelor's in Religious Studies and a Master's in Liberal Studies with a concentration in Film Studies from The University of North Carolina at Greensboro. His primary focus is film history, film literacy and criticism, with the goal of bringing obscure, foreign and films that are labeled "difficult" to the attention of film aficionados of all kinds. Other interests and focus of critique include comparative religion, black humor, 19th century European literature, horror and graphic novels. Mr Wilkins lives in Greensboro, North Carolina with his wife, Tina. Follow @buddwilkins on Twitter.
View all posts by Budd Wilkins →
This entry was posted in film, movie reviews and tagged film forum, godzilla, ishiro honda, Slant Magazizne. Bookmark the permalink.